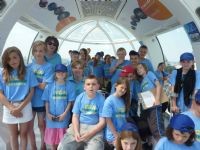 More than 50 students who have now started in Year 7 at the Academy went on trips to destinations including London and Hunstanton during a two-week summer school.

More than 50 students who have now started in Year 7 at the Academy went on trips to destinations including London and Hunstanton during a two-week summer school.

The then-Year 6 pupils went on several trips and spent several days in school doing activities and getting to know some of their future classmates during the summer holidays.

The group travelled to the capital for one of their day trips. During their visit they went on the London Eye, went to see The Lion, The Witch and The Wardrobe in Kensington Palace Gardens and went past the Olympic Park on the day before the Games started.

On the Friday of the first week they went to Hunstanton and the following Monday the group went to Mepal Outdoor Centre near Ely.

On the Tuesday of the second week the group went to The Luxe Cinema in Wisbech to watch Men In Black 3 and the following day they went on a trip to Legoland Windsor.

Alison Deller, pastoral support lead for the King Learning Community, said: “When we were in class we did work which was linked to the trips – we saw Men In Black 3 and then did work on aliens.

“The summer school was very, very good and very rewarding. The children enjoyed it.”

To see more images from the summer school click here to view our gallery.