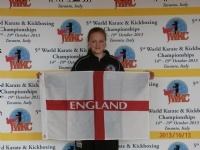 Charlotte travelled with the national squad to compete in her first World Championships in Taranto. It was the third time she had competed at international level and her titles now include the WKC Under 13 World No 2 for Light Contact and the WKC World No 3 for Semi Contact.

She said: “Just being in Italy with the national squad and stepping on the mat to fight for your country was a great experience.”