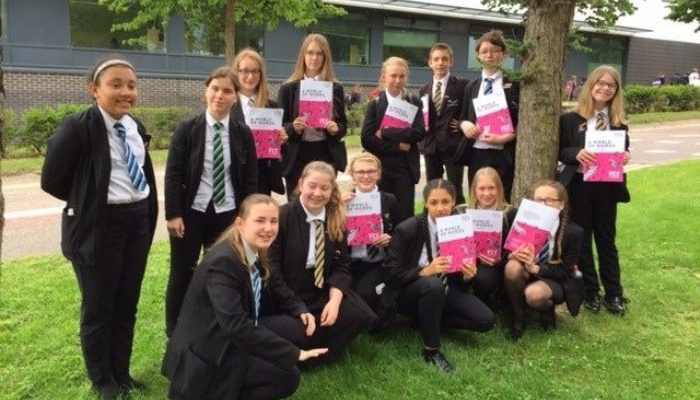 Students took part in creative writing workshops and heard from award-winning authors when they attended a university’s Festival of Literature for Young People (FLY).

The University of East Anglia pioneered the teaching of creative writing in the UK and in order to inspire a future generation of writers, it holds a week-long celebration of writing every year.

A group of students from TCA who have been attending the academy’s after-school creative writing club, along with a number of students who have shown a flair for writing, were given the opportunity to go along on one of the days.

They attended Write On, which was designed to help students discover all the secrets to making creative writing fun and successful with three of the best authors writing today.

They heard from Piers Torday, the best-selling and award-winning author best known for his environmentally important The Last Wild series, which was inspired by the fact that the Earth has lost 60% of its wildlife in the last 40+ years. His latest book is the much-acclaimed The Lost Magician.

Students then heard two authors in conversation - Emma Carroll and SF Said. A former teacher, Emma is best known for her historical fiction such as her new novel, When We Were Warriors, set in World War Two. Her other novels include Frost Hollow Hall, The Girl Who Walked On Air, set in a Victorian circus, and Letters From The Lighthouse, which was the Sunday Times Best Book of 2017.

SF's first prize-winning novel, Varjak Paw, has been adapted for stage and screen and translated into 12 languages. Its sequel, The Outlaw Varjak Paw, was the 2005 Blue Peter Book of the Year.

TCA’s librarian, Miss Robinson, said students thoroughly enjoyed the day and took a lot from it.

“It’s safe to say they were inspired by the event, from the moment we arrived to exclamations from the back of the mini bus of just how amazing the campus was and the experience of being at the university,” she said.

Dawid Okon in Year 7 had this to say: “My favourite part of the day was the book signing. I had the opportunity to meet one of the authors and even discuss the books a little.

“The author talks were engaging and they told us a lot of things I didn't know, and even inspired me. The thing I found most interesting was when the authors talked about their lives - knowing more about a person really helps you understand them.

“In the workshop I went to, we had to create a beginning of a horror story and make up our own character. We also talked about our fears and how to get ideas for a character.

“Overall the day was fun and I'm glad I got the opportunity to take part.”

Theo Ketteringham in Year 8 added: “My favourite part of the event was seeing the authors and hearing how they put their books together.

“The workshop I went to was Horror and I learned how to put your feelings into your writing.”