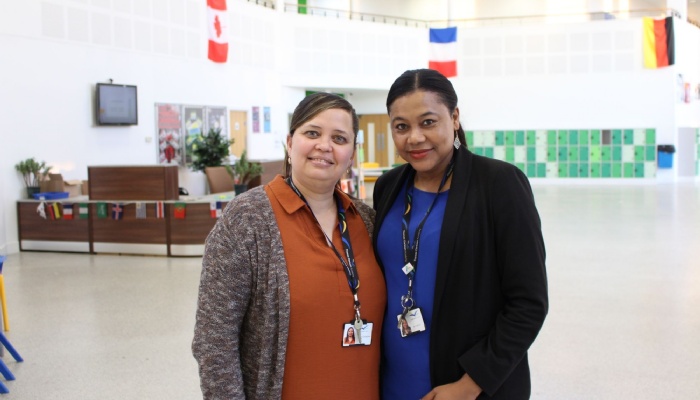 Two South African teachers working at TCA have discovered they are second cousins.

When Renee Callaghan (pictured left) started at TCA last month, she was introduced to Yolande Dennis, who is also South African and has been working at the academy since 2018.

They quickly discovered they are both originally from Durban, a city on South Africa’s east coast, and amazingly, have family ties which make them second cousins.

They had never met before as Yolande left Durban when she was three and moved to Johannesburg.

Now, some 8,000 miles away from home, the pair have been swapping memories and stories of family members they both know.

Mrs Dennis, a maths teacher, said: “Renee asked me who my family were and when I told her the names of my aunt and uncle, she said, ‘that’s my aunt and uncle!’ It turns out that my grandpa and her grandma were brother and sister. Our family are totally shocked.”

Mrs Callaghan, an English teacher who has previously worked in Qatar, said: “When we first realised the link, I thought it was a trick! Our families live so close but we’d never met – who would have thought we’d end up meeting in Wisbech?

“Yolande and I are so far away from our family so it’s so nice to have that connection and to get to know each other.”

Now the pair are looking forward to meeting up and sharing their country’s traditions, including the popular South African dish, lamb curry, sugar beans and roti.