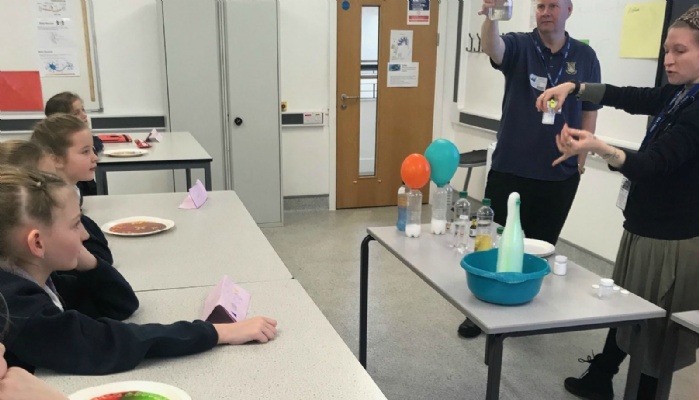 Primary school pupils spent the day at TCA exploring STEM subjects and how STEM is central to certain careers.

Year 4 and 6 pupils from a number of local schools heard from organisations and individuals including Anglian Water, the Ministry of Defence and a crystallisation scientist, who explained the role of STEM in their day-to-day work.

Another purpose of the day was to demonstrate to primary pupils how STEM subjects are taught in a secondary context, so TCA staff from each STEM department ran practical, hands-on activities to engage pupils.

These included programming robots through computers and balloon rockets to demonstrate the 3rd law of motion.

They also familiarised themselves with scientific equipment and techniques, looking at microbes from Anglian Water’s sewage works.

TCA’s Director of STEM, Mr Tarsitano, said: “Feedback has been very positive; the primary pupils and staff commented on the enthusiasm of TCA staff and how interested the children were in talking to the people in the industry.

“Primary staff also commented on how impressed they were with our Year 10 helpers - each primary group had two Year 10s taking them to the different sessions and helping them to carry out the different activities.”

He added: “The day was also important in closing the gap between primary and secondary schools. We now have new contacts made and have future plans to go into primaries to further support the delivery of their curriculum.”