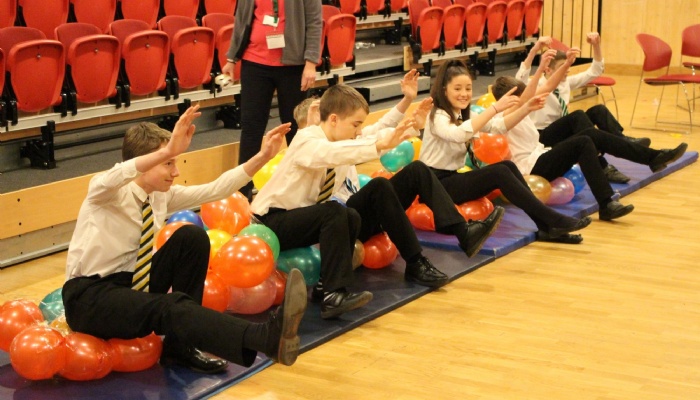 Students enjoyed a host of skills-based activities and considered future careers during Grab a Grade Week.

With the normal timetable suspended, students worked with outside agencies to develop new skills, think about future pathways and examine what skills and qualifications are needed to achieve their goals.

There were also several activities where students thought about the process of starting their own business.

Year 7 kicked off the week with a murder mystery challenge designed by the English department.

After discovering the crime scene and hearing about the ‘murder’ of a billionaire racehorse owner, students were given the opportunity to quiz the main suspects before piecing together the evidence.

Later in the week, the year group worked on their Believe Big ideas – an entrepreneurial challenge where students are encouraged to come up with an innovative idea that could change the world. The 10 best ideas will be narrowed down to a final three, with Principal Mr Scott picking the overall winner. Ideas that have been developed include a solar-powered aeroplane and a remote control vehicle that delivers supplies to the homeless. Watch this space to find out who wins!

Year 8s worked with Anglian Water on a water flow and enterprise challenge and later in the week, looked at what sort of jobs they need to fund the type of lifestyle they would like for themselves when they are older.

Year 9 students spent time considering which options to select at Key Stage 4, with subject taster sessions running throughout the week to give them a flavour of what to expect.

Year 10s gained an insight into the world of work with the completion of work placements – click here to read more.

Bespoke revision programmes tailored to individual needs were delivered to Year 11 students as the countdown to exams got underway. They completed walking, talking mocks, where they were shown how to approach questions to gain full marks. Students also took part in revision workshops and competitions using the various revision apps such as PiXL. In addition, they looked at time management skills and how to mitigate exam stress.

Year 12s took part in various activities designed to get them thinking about career pathways.

They visited Anglia Ruskin University to work on their personal statements, took part in a Q&A session on university life, and had a tour of the facilities, including the university’s medical school.

They also took part in ‘Earn to Learn’, a programme which encourages students to consider the sort of lifestyle they want in the future and then how much they would need to earn to fund it.

In addition, Year 12s also completed a CV masterclass and ended the week with a business challenge.