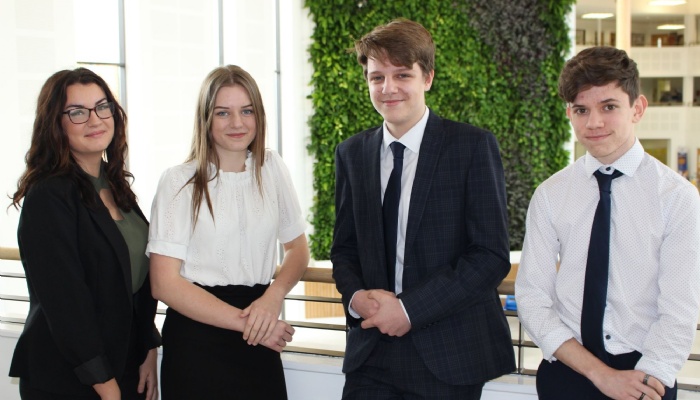 A Student Leadership Team has been appointed after impressing staff with their ideas and commitment to the academy’s vision.

Sixth Form students were invited to apply for the chance to work together on both academic and pastoral matters and to act as the student voice within the academy.

After reviewing the applications and interviewing the candidates, Principal Mr Scott and Head of Sixth Form Miss Hornby selected Rugile Lipaviciute and Alex Bartram and their deputies Alistair Follen and Emma Peacock (pictured above in a Sixth Form 'bubble').

Miss Hornby said: “What impressed us was their understanding of the vision we have for the Sixth Form and where we are heading. They are keen to promote equality, particularly around LGBTQ+ issues, and are looking forward to representing the student body.”

Rugile, who is in Year 12, said she was keen to act as the ‘middle man’ between students and staff. She said: “I think for some students, it can be easier to approach us with an idea or an opinion.

Alex said he is looking forward to being a “voice for the people”.

He said: “I think it’s good for younger students to have role models so I’m looking forward to taking on that job.”

The group will hold regular meetings with Mr Scott and Miss Hornby to share student ideas.