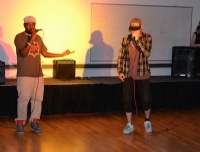 Students showed off their rapping and beat box skills at the first ever TCA Student Slam.

Students showed off their rapping and beat box skills at the first ever TCA Student Slam.

After two months of working with professional rapper Xidus Pain and beat boxer Skilly Skillz. A group of talented students performed their original pieces at the event on March 17th.

The Student Slam was organised by ADeC as part of Phonic, a Youth Music funded project that gives young people the opportunity to take part in music workshops and performances.

During eight weekly sessions the students developed their skills and devised pieces. Also delivering fantastic performances at the Slam were a number of talented dancers, singers and musicians from TCA. The event was brought to a close with a special freestyles rap and beat box performance by Xidus and Skillz.

Arts development manager Nathan Jones said: ““It has been wonderful to see the progress the students have made over the course of the project. They have not only developed their musical talents but also their self-confidence and teamwork skills. The performances at the Student Slam were fantastic.”

Helping to organise and run the event were another group of students who have been attending event training sessions with ADeC. The group learnt about all the jobs involved with staging and event and the terminology used. They designed and distributed posters, operated the lighting and set up the venue.

There will be another Wisbech Slam event held at the Oasis Community Centre (St. Michaels Avenue, Wisbech, PE13 3NR) on Saturday 5th April. The event will run from 7 – 8pm and entrance is £3.

On the same day as the Slam there will be free workshops given by Skillz and Xidus during the afternoon. The workshops run from 2.30 – 4pm and 4.30 – 6pm to book a free place please contact at ADeCNathan.jones@adec.org.uk