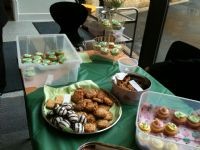 More than £200 was raised for Macmillan Cancer Support when home-made cakes were sold in the Academy’s restaurant.

More than £200 was raised for Macmillan Cancer Support when home-made cakes were sold in the Academy’s restaurant.

A total of £223.81 was raised at the Academy from sales of cakes and raffle tickets and from donations put into a collection bucket.

The prizes in the raffle were a giant chocolate cupcake for the first prize winner, an apple cake for second prize and a lemon cake for third prize.

A team of students got involved in selling the cakes and promoting the sale to students and teachers.

The cakes on sale were baked by the students and staff who organised the event.

Teaching assistant Nicki Cobbin, one of the organisers of the sale, said: “The event raised a fantastic £223.81 and was a collaboration of the Learning Support Centre (LSC) and the Ethnic Minority Achievement (EMA) teams.

“Students and staff from both the LSC and EMA teams worked alongside each other from the onset - this included developing an awareness of the work of Macmillan, producing posters to advertise our event, making cakes both at home and in school, charity money bucket collection and selling the cakes.

“Congratulations goes to everyone who helped make the event so successful.”

To see more pictures from the sale click here to view our photo gallery.