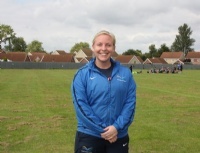 PE teacher Amy Anderson will be pulling on her trainers for the Great North Run this Sunday (September 13th).

PE teacher Amy Anderson will be pulling on her trainers for the Great North Run this Sunday (September 13th).

Miss Anderson will be joining her brother Craig to run the half marathon event in Newcastle in memory of her Nanna who died last year.

The pair are raising funds for the Alzeheimer’s Society.

Miss Anderson said: “My Nanna passed away on the day of the Great North Run last year, so my brother and I decided to run it this year in her memory.

“In preparation I have run the Grand East Anglia Run in King’s Lynn and in July I did a 10km run around the Olympic Park in London. I am hoping to finish in around two and a half hours, but the main thing is to finish rather than the time.”

Anyone who would like to sponsor Miss Anderson can do so by donating at www.justgiving.com/GNRAnderson. Alternatively you can text GNRA61 followed by £1, £2, £3, £5 or £10 (e.g. GNRA61 £2) to 70070. There are also money pots located around the academy for loose change donations.