History trip to the capital 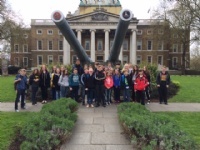 A group of Year 8 students enjoyed a trip to London and visited some famous places.

A group of Year 8 students enjoyed a trip to London and visited some famous places.

The students visited the Imperial War Museum and the London Dungeon as part of the visit on Monday (April 25th).

Teacher Lois Sandy said: “Both of the places link to the Year 8 History Curriculum so it was a great experience for the students and will aid their learning.

“At the Imperial War Museum the students were able to see tanks and planes that had been used in both wars, learn about the Home Front in World War II as well as develop their understanding of the causes of both wars through the use of the interactive displays.

“In the London Dungeon they were horrified by torture techniques used to extract information from Guy Fawkes, terrified by the mystery of Jack the Ripper and disgusted by “Plague Street” which had its own very unique smell! In between the two attractions we stopped on the South Bank to admire the Houses of Parliament/Big Ben and the London Eye.”