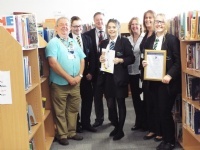 Three students have been recognised for their artistic efforts in a competition run by the Wisbech Lions Club.

Three students have been recognised for their artistic efforts in a competition run by the Wisbech Lions Club.

Neringa Matakaite  (pictured far right) was judged to be the TCA winner in the annual Peace Poster competition which is held by Lions Clubs across the world.

Eight local schools took part in the competition and TCA students Harley Lovegrove and Amber Moran also were highly commended for their entries. They were presented with certificates and vouchers by Lions Club President Bill Batrick

TCA Librarian Debbie Trafford said:  “All the winning posters from each of the Wisbech schools will be on display in Tesco in Wisbech for a week in October. The competition then continues to National, then International level. We wish our students luck in these heats! Thank you to the Lions Club for offering us this opportunity.”