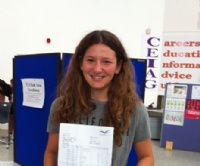 It has been a great day at Thomas Clarkson Academy as students celebrated their GCSE results.

It has been a great day at Thomas Clarkson Academy as students celebrated their GCSE results.

After many months of hard work, students enjoyed the fruits of their labour as they gained the grades to either go on to further education or work.

Results were improved on last year with 38 percent of students gaining 5 A*C (including Maths and English).

Student Alicia Baghdouyan gained all A* and A grades with A*s in maths, French, history, Spanish and business studies.

She now intends to stay on at the sixth form to study A Levels in biology, chemistry, psychology and maths.

She said: “I have worked really hard but could not have done it without my teachers. I am just so happy and cant wait to start my A levels. I want to go on to have a careers in research or medicine.”

Charlotte Cameron gained 2 A*s and 5 A grades and 3 C grades. George Boreham gained an A* in maths and an A in Geography and will stay on at the sixth form.

Kaya Kilby is going to college to study uniform services as she sets out on the path  towards a career in the forces. Connor Atkins gained great results including an A in maths and will now stay on at TCA Sixth form.

Courtney Beckett gained great results including an A* in drama and As in geography, maths and English.

She said: “I didn’t think that I would do so well and I am delighted. I did put in a lot of work and stayed at school until 5pm most days in order to revise.”

An apprenticeship and college await Harry Ward and John Kyla (pictured above) who have been best friends since babyhood.

Harry said: "We have gone all throgh school together and have always been best friends. it will be strange to be separated now as we are going onto different things."

Principal Clare Claxton said: “The staff at TCA are very proud of the students for the progress they have made. There is still a long way to go until TCA is a truly great place to learn however there is a plan in place to make this happen as well as a strong will.

I would like to send my best wishes to Anne Hill as she assumes the role of Principal at TCA.”