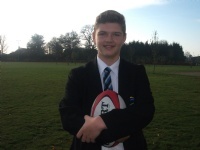 Congratulations to our student Danny Grieve who has just been accepted into Northampton Saints Rugby Academy despite only taking up the sport just a year ago.

Congratulations to our student Danny Grieve who has just been accepted into Northampton Saints Rugby Academy despite only taking up the sport just a year ago.

Danny, who also plays for Wisbech Town Rugby Club, was encouraged to go along for trials by sports teachers Mr Porfirio and Mr Smith who saw his potential. After trials at Cambridge and Northampton where he was put through his paces by coach, Bob Mann, he got the great news he was in the squad.

Although Danny, from Year 8, has to wait until winter 2017 before his academy training regime kicks in, he is keeping up his fitness by playing with his older schoolmates in TCA’s Year 9 rugby team who most recently won 75 – 20 against Witchford Village College.

He said: ‘I used to play football for five or six years, but I found rugby just over a year ago and it is my new hobby. My PE teachers put me through for the Saints Academy selection process.  I just had to practice really hard playing my best. They wanted to see what we could do in terms of speed and reaction and I had to wait a while before I got the news that I had been selected.


'I love rugby and play in a variety of positions. I like it because I am a team player and it is good at developing tactics, friendship and leadership skills. My family and friends are thrilled for me and ideally I would love a career in rugby or something sports-related.’