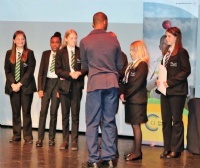 Well done to our amazing students who provided the entertainment and won awards at the Brooke Weston Trust Sports Award Evening.

Well done to our amazing students who provided the entertainment and won awards at the Brooke Weston Trust Sports Award Evening.

The Sports Awards were held at Corby Cube and students from across the Trust took part. Dancers from Thomas Clarkson Academy provided the entertainment, with pieces called Irrestistible Pain and QuackQuack. Special guests were tennis player Jade Windley, footballer Alistair Patrick-Heselton and freestyle footballer Jamie Knight who gave a display of his tricks.

He also presented Danny with his trophy. Danny’s nomination read: ‘After being Isle of Ely champion as captain of the Year 8 Rugby team, with six wins out of six games, Danny was signed for Northampton Saints Academy and has now been invited to an England Rugby training camp with England captain Dylan Hartley.’

The Year 7 girls netball team's nomination said 'They won the Isle of Ely tournament for the first time. They went undefeated all season and dominated all games. Every member of team put in a massive effort and teamwork throughout the season was second to none. All the girls attended training regularly and demonstrated outstanding sportsmanship.' The team was presented with their trophy by Alistair Patrick-Heselton.

The evening was a great success, organised and hosted by TCA PE teacher Kirstie Smith, who is the Trust Director of Sport. Well done to her on a fantastic evening, and to our sports students - we are very proud of you!

More information on the evening, and a picture gallery can be accessed here: