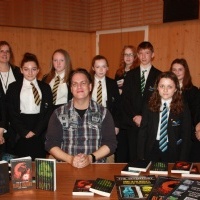 An author who has worked in Hollywood encouraged students to think about the impact of story-writing on their lives during an inspiring talk.

An author who has worked in Hollywood encouraged students to think about the impact of story-writing on their lives during an inspiring talk.

Andy Briggs wrote the story line behind Hellboy and has collaborated on other major movies, as well as working with the iconic Stan Lee on graphic novels and creating novels of his own.

Andy gave an exciting and inspiring talk to every student in years 7 and 8, to nearly 100 Year 5 pupils from Peckover Primary School and also to some of our older students and Library Ambassadors (pictured with Andy).

TCA Librarian Debbie Trafford said his talk was thought-provoking and interesting. She said: “Research for his books has involved him riding elephants (did you know they have fleas as big as your thumbnail?) and sniffing gorillas, which he recounted in hilarious fashion.

“Andy describes himself not as an author but as a writer and he showed our students how so many aspects of their own lives involve story-writing, including the video games they play and the songs they listen to.

“He challenged his audience to work hard and to go out and be creative: someone in the audience could be the next Beyoncé or Will Smith or JK Rowling, but only if they were willing to work for it.”

After his talks, Andy signed books and spent some time chatting to a small group of Library Ambassadors about their interests, discovering a shared enthusiasm for Comic-Con.

Thank you to Andy for coming to visit and for his inspiring words.