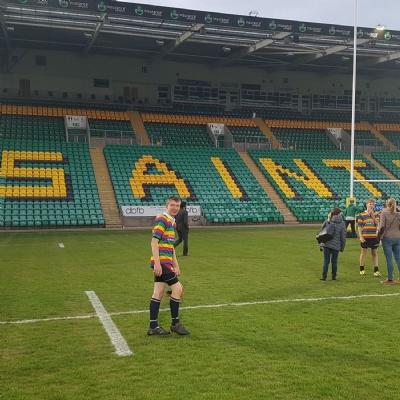 A talented rugby player who secured a place on Northampton Saints’ Developing Player Programme recently took part in a tournament organised by the club.

Following a trial, Connor was selected for the under 13s squad for the Huntingdon and Peterborough region. During the rugby season, he trains in Peterborough with the club’s coaches on a weekly basis, something he says has had a significant impact on his game.

Most recently, the Year 8 student took part in a tournament at the Saints ground against teams from three of the Saints’ other DPP regions.

Along with tries scored, the tournament was also scored on passes made, sportsmanship and teamwork.

Connor, whose love of rugby comes from his dad, also plays for TCA and Wisbech Rugby Club.

“I would like to continue with the programme as I get older.”

Connor will play again in October for the DPP and will fight for his spot as an under-14 player.

Danny Grieve in Year 9 was also selected for the DPP programme after demonstrating his talents on the rugby pitch.