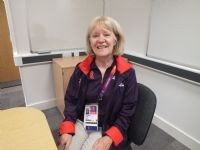 Sue Beedham, the Academy's Assistant Head of Design and Technology, got the chance to live the Olympic dream when she was a Games Maker at the London 2012 Olympic and Paralympic Games.

Sue Beedham, the Academy's Assistant Head of Design and Technology, got the chance to live the Olympic dream when she was a Games Maker at the London 2012 Olympic and Paralympic Games.

Mrs Beedham’s first event as a Games Maker  at the Olympic Games was the men and women’s road race cycling events, during which Lizzie Armitstead won a silver medal, Team GB’s first medal win of the Games.

She then helped at the time trial event at which Team GB’s Bradley Wiggins won gold.

Mrs Beedham continued in her Games Maker role at the Paralympic Games by helping at the marathon events. From her spot on the route she was 100 yards away from the iconic Shard building.

Mrs Beedham also got the chance to watch Team GB’s stars of the Olympic and Paralympic Games as they paraded through the capital after she was one of 7,000 out of 70,000 Games Makers lucky enough to get the chance to attend.

She saw a number of the stars of the Games, including Chris Hoy, Victoria Pendleton, Sarah Storey and Jonnie Peacock, as well as Wisbech-born Paralympian Jody Cundy. Mrs Beedham said: “I was right at the end of The Mall with Buckingham Palace to the left. The first person I saw was Mo Farah, then I saw the Brownlee brothers and the boxer Nicola Adams.”

Mrs Beedham was also selected in a ballot to get the chance to watch the rehearsal for the grand Opening Ceremony for the Olympic Games. She said: “I felt really honoured to be there. All the time they were saying ‘please keep it a secret’. We were just screaming.”

Mrs Beedham said the experience had been fantastic. She said: “The organisation has been absolutely slick, I felt proud to be British.

“Wherever we went everyone was thanking us, people of all languages were saying thank you.

“We felt really important, it was delightful.”